When you have mastered this topic, you will:

When a beam monochromatic light passes through a transparent medium, part of the light is absorbed and the transmitted beam has a lower intensity than the intensity of the incident beam.

Solutions are placed in containers (called “cuvettes“) whose material is transparent: quartz is commonly used, but for visible light, one also uses disposable cuvettes made of polystyrene or polycarbonate. 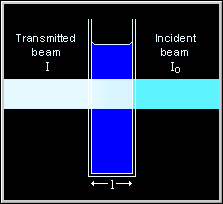 The TRANSMITTANCE, T of the solution is defined as the ratio of the intensities of the transmitted beam, I to the intensity, Io of the incident beam:

The ABSORBANCE, A of a solution is defined as:

Since A is a logarithmic function, it is dimensionless.

Both of the above quantities are readily measured using an instrument called a SPECTROPHOTOMETER, which delivers monochromatic light over the ultraviolet and visible ranges of the electromagnetic spectrum, and have suitable light detection and recording devices.

The Beer-Lambert law (also known as Beer’s law) (as it applies to solutions of light-absorbing substances) states that the absorbance is directly proportional to the path length, l of the sample and its concentration, c:

where e is the MOLAR EXTINCTION COEFFICIENT (with dimensions of dm3.mol-1cm-1) of the solute, c is the molar concentration (in moles.dm-3), and l, the path length, is measured in centimeters.

The molar extinction coefficient is constant for a particular solute, and varies with the wavelength of the light. A plot of e against the wavelength, l, is called an ABSORPTION SPECTRUM. Such spectra, an example of which is shown on the left, may be in the ultraviolet or visible ranges of the electromagnetic spectrum.

Application of the Beer-Lambert law

The Beer-Lambert law is readily applicable to the determination of the concentration of numerous substances, provided that (i) the molecular extinction coefficient e for the subtance is known at the wavelength at which the measurements are carried out, and (ii), that the path length of the solution is known accurately. Commonly, cuvettes with a path length of 1 cm are used, then, the molar concentration c is simply:

Practically, it is more accurate to determine the absorbance of solutions at several known concentrations of solute, and draw a STANDARDIZATION CURVE. The linear range of the plot can then be used to determine the concentration of an unknown solution of that solute. The value of e and l need not be known. 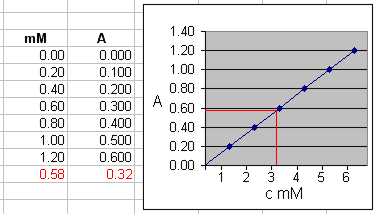 In the example on the left, the sample has an absorbance of 0.58, which, referred to the standardization curve, gives a concentration of 0.32 mM.

In the next section, we will see how the Beer-Lambert law can be used to determine the concentration of proteins.

Deviations from the Beer-Lambert law

While the Beer-Lambert relationship predicts a linear response between the measured absorbance, A, and the concentration c, of a light-absorbing solute, that is, A µ c, giving rise to a linear plot of A vs. c, as shown here on the right, the deviations discussed below mean that it is unwise to assume that such a linear relationship holds under all sets of experimental conditions.

It is well to remember that the Beer-Lambert law has a number of limitations. Among these are:

For reliable results, always take readings at flat regions of absorption bands, that is, at the peak values of absorption bands. Usually, the band with highest value of e, as this ensures maximum sensitivity. Referring to the diagram on the right, one would use the wavelength l’.

Proteins absorb light in the ultraviolet region of the electromagnetic spectrum. The absorption band at 280 nm is due to electron transitions in the aromatic rings of phenylalanine (Phe), tyrosine (Tyr) and tryptophan (Trp). The ultraviolet absorption spectra of these amino acids are shown on the right. Groups of atoms which give rise to such electronic transitions are called CHROMOPHORES.

The absorption at 280 nm in proteins is normally too weak to be of practical use when determining low concentrations of proteins. To get around this, one has to make a coloured derivative of the protein by reacting the protein with a dye, COOMASSIE BLUE, which under suitable conditions, give rise to an intense blue complex, having a peak at 590 nm. This is the basis for the Bradford method of determining protein concentration.

To generate a standard curve for the determination of protein content in unknown solutions, such as column eluates, one prepares dilutions of a standard BSA (bovine serum albumin) solution, and one then determines the absorbance at 595 nm after treatment with Coomassie Blue. Results should be entered in your laboratory notebook as shown below:

Have a good look at the data above, and make sure that you understand what is going on!

The most convenient way to use the data to prepare a standard curve is to manipulate the results in a speadsheet.

Open up Microsoft Excel, and enter the data as shown here on the left.

Note that since the spectrophotometer was zeroed on a solution of buffer only, the absorbance reading for 0 µg BSA is a valid data point and must be taken into consideration.

Highlight the data (the cells in the range A3..B9), and the click on the chart icon. Alternately, click on the menu item Insert/Chart.

Choose the chart type XY (Scatter). The chart will be inserted into the sheet, and will look something like the fragment on the right.

Click on the menu item Chart, and choose Add trend line. As type choose Linear. Click on the Options tab, and check the box labelled Display equation in chart. Click OK. The linear regression line will appear on the chart, and this is the best linear fit to your data. The equation relates y, the dependent variable (absorbance, in this case) with the independent variable x (the mass of BSA used in each determination).

Step 4 – Using the spreadsheet as a tool:

The equation enables one to rapidly calculate unknown masses of protein from measured absorbance data determined under exactly the same conditions as were used to determine the standard curve. In this case,
µg BSA = (A590 + 0.0014)/0.1444.

You can also smarten up the spreadsheeta bit if you like, print it, and paste it in your notebook…